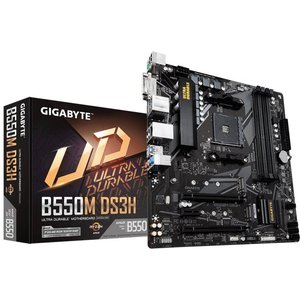 .rm__row { display: flex; justify-content: center; align-items: center; flex-direction: row; } @media (max-width: 800px) { .rm__row { flex-direction: column; } } PCIe 4.0 for Everyone The AMD B550 chipset makes PCIe 4.0 possible for anyone who wants higher performance, bandwidth and speed. Ready for 3rd Gen AMD Ryzen processors and beyond. 5+3 Phases Pure Digital VRM Solution with Low RDS(on) MOSFETs GIGABYTE UD series motherboards use a 5+3 phases pure digital PWM + Low RDS(on) MOSFETs design to support the 3rd Gen AMD Ryzen™ CPUs by offering incredible precision in delivering power to the motherboard's most power-hungry and energy-sensitive components as well as delivering enhanced system performance and ultimate hardware scalability. Dual NVMe PCIe 4.0*/3.0 M.2 Connectors With NVMe PCIe 4.0*/3.0 x4 and PCIe 3.0 x2 M.2 connectors onboard, GIGABYTE Motherboards bring users to experience NVMe mode or SATA mode connectivity for M.2 SSD devices. Delivering up to 64 Gb/s data transfer speed, the dual M.2 connectors design provides an ideal storage solution while also supporting in RAID modes. *Actual support may vary by CPU. High Speed Gigabit LAN with Automatic Bandwidth Allocation Realtek 8118 LAN is a high performance and friendly network chip for gaming players with automatic bandwidth allocation to ensure the highest network priority of the game or application. It can provide users the most comprehensive features and the fastest and smoothest Internet experience. Smart Fan 5 With Smart Fan 5 users can ensure that their gaming PC can maintain its performance while staying cool. Smart Fan 5 allows users to interchange their fan headers to reflect different thermal sensors at different locations on the motherboard. Not only that, with Smart Fan 5 more hybrid fan headers that support both PWM and Voltage mode fans have been introduced to make the motherboard more liquid cooling friendly. Fan Stop Achieve fan silence. With Fan Stop, map any fan to stop completely when temperatures drop below a specified threshold. Which fan stops, based on readings from which sensor, and at what temperature—all of it can be customized to your liking Hybrid Fan Pin Headers Assume complete control over your liquid cooling setup! Smart Fan 5 receives up-to-the-second information on flow-rate and water-temperature through the Hybrid Fan Pin Headers or external thermistor sensors—giving you absolute mastery over your PC. All Hybrid Fan Headers can automatically detect the type of cooling device whether it be fan or pump with different PWM or Voltage mode. RGB Fusion 2.0 With B550 Motherboards, RGB Fusion 2.0 is even better with Addressable LEDs. RGB Fusion 2.0 offers users the option to control onboard RGB and external RGB / Addressable LED light strips* for their PC build. Already feature filled with colors and patterns, RGB Fusion 2.0 are now upgraded to improve the Addressable LED support. With external Addressable LED strips, where each LED is digitally addressable that users can experience even more patterns, styles, and illuminations. With B550 Motherboards support the external 5V Addressable LED lighting strips and up to 300 LED lights. RGB Fusion 2.0 with Addressable LEDs comes with new patterns and various speed settings with more to come. * The external RGB LED strips and Addressable LED strips are not included with Motherboard purchase. High-End Audio Capacitors GIGABYTE motherboards use high-end audio capacitors. These high quality capacitors help deliver high resolution and high fidelity audio to provide the most realistic sound effects for gamers. GIGABYTE motherboards feature an audio noise guard that essentially separates the board’s sensitive analog audio components from potential noise pollution at the PCB level.