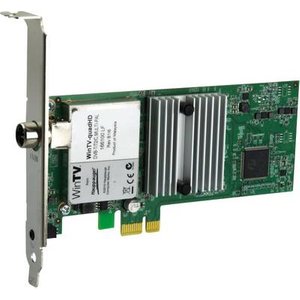 You can convert your PC/Notebook into a digital video recorder Record digital TV programs manually or automatically via timer without any loss of quality on your hard drive and you will see the recordings later on your PC.Electronic programme guideWith the electronic program guide you always have the overview of the TV-program the next seven days and can directly via mouse click the recording of programs plans.DVB-C digital cable television WinTV quadHD has four simultaneously usable DVB-C tuner is integrated. These can be used at the same time as live tv, record or pause the transmitter can be used.All built-in DVB-C Tuner are using the existing antenna connection can be used. Large cable providers in Germany such as Kabel Deutschland or Unity media food many unencrypted DVB-C television station. SD stations will be here in the MPEG-2 format and HD channels in the H.264 format is fed.Time-displaced television watching Thanks to the Time-shift function you do not miss any second television pleasure. Keep the current program and put it at a later time, when it suits you.DVB-T/T2 Digital Terrestrial Television In Germany are free to air DVB-T/T2 transmitter broadcast.WinTV-quadHD can unencrypted DVB-T or DVB-T2 channels and via the included WinTV8 HD software.There can be up to four different stations at the same time via antenna can also be viewed, recorded or paused. The recording is unchanged in digital format, such as on the broadcaster transmitted.The four tuner on the TV card be via a single antenna connection is achieved.The WinTV 8 HD application contains all for the display of DVB-T and DVB-T2 programs necessary codecs (MPEG-2, H.264 and H.265 HEVC). This text is machine translated.