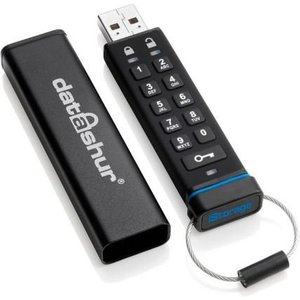 The iStorage datAshur is an easy to use and affordable USB flash drive, employing PIN code access with military grade AES 256-bit hardware encryption. The datAshur incorporates a rechargeable battery allowing the user to enter a 7-15 digit PIN onto the on-board keypad before connecting the drive to the USB port. All data transferred to the datAshur is encrypted in real-time with the built in hardware encryption engine and is protected from unauthorised access or if your datAshur is lost or stolen. The datAshur automatically locks when unplugged from the host computer or power to the USB port is turned off. The datAshur operates straight out of the box, does not require any software or drivers to be installed and is compatible with PCs, MACs, Linux and embedded systems. The datAshur delivers drag and drop encryption, plug and play simplicity and can be used with any off the shelf backup software. The datAshur can be configured with independent User and Admin PINs, making it perfect for corporate and government deployment. If the User forgets their PIN, the drive can be unlocked using the Admin PIN which will then clear the old User PIN and allow the User to set a new PIN. The datAshur also incorporates a drive reset feature which clears both User and Admin PINs, destroys the data, creates a new randomly generated encryption key and allows the drive to be reused. The datAshur is capable of generating an infinite number of randomly generated encryption keys, allowing the user to reset the drive as and when required. As the iStorage datAshur is unlocked via the on-board keypad and not via a keyboard, it is not vulnerable to software/hardware based key-loggers or brute force attacks. The datAshur protects your data with a “Brute Force Hack Defence Mechanism”, which deletes the encryption key and destroys all stored data if the incorrect PIN is entered a total of 10 consecutive times. The datAshur is an investment that will last for years. Its rugged, extruded aluminium, water proof casing is tamper evident and protects it against physical damage. The internal drive components are also sealed with a tamper proof coating. Features Military grade Full-disk AES 256-bit CBC Hardware Encryption Works with any USB/USB On-The-Go devices Drive reset destroys data and recovers use of drive Compatibility with any OS - Windows, MAC, Linux Guaranteed with 3 year warranty The Information Commissioner’s Office (ICO) now has the power to fine businesses and government bodies up to £500,000 for serious breaches of the Data Protection Act. This includes the loss of an unencrypted USB flash drive that contains client data. The ICO has been very clear in advising businesses and government bodies to encrypt all data that workers access, they also recognise that data which is encrypted and lost or stolen is not vulnerable

We use cookies on our website to give you the most relevant experience by remembering your preferences and repeat visits. By clicking â€śAccept Allâ€ť, you consent to the use of ALL the cookies. However, you may visit "Cookie Settings" to provide a controlled consent.
Cookie SettingsAccept All
Manage consent